Raising Kids To Think WE, Not ME!

93 percent of adults feel we are failing to instill values in children. What’s more, “being kind and caring” isn’t even high on our kids’ priority lists! Two-thirds of adolescents ranked their own personal happiness as more important than their goodness. It’s time to help our kids switch their focus from Selfie to Unselfie and see themselves as caring, compassionate people.

Of course, we’re proud of our children’s successes, but in trying to make them feel good we tend to focus on their cognitive, social and physical feats. In fact, several national surveys show that most of adults feel we are failing to instill moral values in our children. That is a tragedy to our children and a huge disservice to society.

Research by Nancy Eisenberg confirms that we generally behave in ways consistent with our self-image. So children who see themselves as “Caring People” are more likely to step in, help others and do the right thing. That’s why I named “Moral Identity” as the second of the “Nine Crucial Empathy Habits” in my book, UnSelfie: Why Empathetic Kids Succeed in Our All About Me World.

How do we help children develop Moral Identities so they see themselves as caring and kind and are more likely to use those beliefs to guide their behavior?

How do we help our children learn to value other people’s thoughts and feelings?

One of the most powerful ways is by involving them in real, meaningful first-hand “giving-to-others” type experiences. Nate, a fourth grader from Stillwater, Minnesota who I wrote about in UnSelfie, is a prime example of how giving-not getting-can activate empathy and instill a Moral Identity in children. 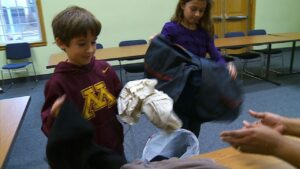 Nine-year-old Nate Dreyfus saw an inspiring sight on a cold day that stirred him. He witnessed a simple act random act of kindness.

“There was this man,” Nate said. “He got out of his car, took off his jacket and gave it to a man on the street. I felt really good inside that he did that, so I wanted to start doing something like they that.”

And so Nate told his family, and enlisted their help. They put out donation boxes in his neighborhood, and Nate’s project gained attention. The nine-year-old collected seventy-nine coats for families in need, and then delivered them with his family to a nearby charitable organization called, Project Hope.

The young boy saw first hand that his kindness would matter. Nate learned that his donations would be given to people who came in looking for warm clothes.  He saw impact of his kindness and recognized that he could make a difference.

By Monday morning he and his sister returned with more coats and jackets.

And it all started with empathy.

Robert Ornstein and David Sobel in their best-selling book, Healthy Pleasures, described the glow that Nate experienced as a “Helper’s High.” It’s the euphoria that people feel when they help others close to them. And that “high” literally translates into a feeling of warmth in which you are full of energy but also very calm at the same time.

There’s even a biological basis to the feeling. Serotonin, sometime known as the “happy hormone,” is secreted. And such a feeling is addictive. Once you feel that high, you want to do more and more to help. Just like Nate.

In our quest to help our children find “happiness and success,” we may be overlooking the real brass ring. Encouraging children to help others gives them immense joy and opens their hearts. But doing for others also lets kids see themselves as Changemakers: people who make positive differences and inspire others to follow.

And it all starts with empathy, and planting those seeds is what nurtures that crucial Empathy Advantage your child needs for success and happiness, and leading a meaningful life.

As in most families, each of my sons has different interests, skills, and strengths. To have all of them involved in the same giving to others project wouldn’t have been wise. So my husband and I tried to encourage each child to find a project that matched his concerns and talents. Not only did they enjoy volunteering, but were more committed to their causes. And all three boys caught that “Helper’s High” and continue to want to give back to others. Here are ways to match your child’s interests, passions and strengths with volunteer projects:

1. Likes to read, write, tell stories: Offer to read or write letters for young kids, the elderly, or people with disabilities; start a letter-writing campaign about an issue that concerns him; be a pen pal with an orphan overseas, donate used books to a library, homeless shelter, or classroom.

2. Enjoys sports, theatre, gymnastics, or dance: Help coach younger children in dancing, gymnastics, a favorite sport, or acting, volunteer for the Special Olympics; help students with disabilities at a local school; repair toys for needy or sick kids; sew blankets for a shelter.

3. Is original, enjoys working alone to pursue own interests and goals: “Adopt” someone who could use a friend such as an elderly person; teach a special hobby—magic, juggling, art—to needy kids; ask permission to start a food drive at the parents’ workplace or community.

4. Enjoys being with others, likes joining or leading groups: Start a club and make snacks for homeless kids or soup for a shelter; put together a walk-a-thon donate proceeds to a local charity; go door-to-door with a parent and friends collecting warm clothes to give to homeless.

6. Is logical and mathematics, enjoys science and math, likes to figure things out: Tutor math, science, or computers to younger children; play chess or checkers to kids at a hospital; make flyers asking for specific donations to a shelter and post in the community.

7. Likes to draw and design, imaginative and creative: Paint or hang up hand-painted pictures at a shelter, make greeting cards and deliver them to a hospital; do craft projects with the elderly.

8. Likes the out-of-doors and nature: Plant vegetables then donate the harvest to soup kitchen or shelter;help kids at a shelter plant a garden; clean up a park, plant trees on school grounds

Find a project that matches your child’s interests, abilities and passions to realize he is a difference maker.

Join me! It’s time to start an UnSelfie Revolution!

Follow me as I share ways we can cultivate our children’s empathy, help them develop Caring Mindsets,  and switch their attitudes from WE, not Me.

The ideas and story in this post are from my book, UnSelfie: Why Empathetic Kids Succeed in Our All About Me World. It describes how to cultivate the Nine Crucial Habits of Empathy, and offers 300 strategies parents and teachers can use from toddlers to teens to do so.

My latest book is called, Thrivers: The Surprising Reasons Why Some Kids Struggle and Others Shine. It describes how to instill seven essential character strengths that are highly correlated with resilience. Empathy and Integrity are two of those crucial strengths. The seven will help children be more likely to thrive in our highly uncertain world.